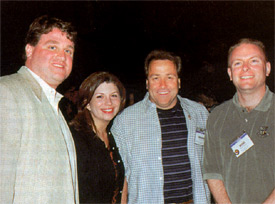 “Effective Leadership in the 21st Century” was the theme of the 2001 Young Leaders Council Annual Meeting held April 6-9 in Tempe, Ariz., and participants were treated to an outstanding lineup of speakers who shared ideas and practical tips on how to get there.

Speaker Armand Allaire presented “A Tune-Up for Managers” and “How to Develop A Unique Selling Proposition” which helps managers increase their communications skills in order to be more effective leaders.  The session, “All Politics is Local” featured speaker Susan Bitter Smith, former Republican candidate for Congress in 2000 and executive director of the Arizona Cable Telecommunications Association, and Ken Quartermain, executive director of the Arizona Rock Products Association.  They discussed ways to become more active in the political process by working on campaigns and volunteering.

NSSGA Executive Vice President and COO Charlie Hawkins also participated in the session and gave a congressional update and forecast about what the aggregates industry can expect from the 107th Congress.  Rounding out the educational sessions, NSSGA Public Affairs Division Chairman Deb McCarver, Rogers Group, Inc., presented “Building Trust and Credibility in the Community,” which focused on the importance of dealing effectively with the community and public officials.  Audience members were chosen to play various roles in a mock hearing.

The YLC was pleased to have NSSGA Chairman Greg Bush, Linwood Mining & Minerals, as a special guest and luncheon speaker.  He stressed the importance of becoming more involved in the activities of the association and encouraged participation in the YLC.

Vulcan Materials Company hosted a tour of its West 43rd Avenue Plant in Phoenix.  The plant is located southwest of downtown Phoenix on 640 acres along the Salt River.  Plant Manager Kenny Benson took members on a walking tour of the operation, which is still under construction.

The year 2000 marked the beginning of an annual tradition for the YLC.  A leadership award was created in memory of a former YLC steering committee member, the late Mark S. Walsh of Rein, Shultz and Dahl of Illinois.  In 2001, the second annual Mark S. Walsh Leadership Award was given to Graham Hardwick, CSR America, Inc.  Graham’s continued support and enthusiasm has been an integral part of the success of the Young Leaders Council.

This meeting also marked a change in leadership.  Chairman Steve Detwiler’s term ended and he was praised for his tireless efforts to promote the awareness and importance of the YLC and for his dedication to the group.

The roster of the YLC continues to grow, and two of the goals of the YLC have been to retain and motivate our new and current membership and to recruit new members.  The current YLC membership stands at 150 individuals representing more than 50 producer members and 18 M&S companies.  For more information on becoming a member of the Young Leaders Council, contact Kelly Campbell (kcampbell@nssga.org) of the NSSGA staff.